On December 31 between 11:00 am and 4 pm close to 50 members of the Victoria Masters Swim Club along with friends from Mercury Rising Triathlon Club jumped in the water at Crystal Pool to honour Jeanne Carlsen – a Canadian Masters swimming legend.

Jeanne, who recently lost her battle with pancreatic cancer, lived in Calgary but was a regular at swim meets in BC and to many considered family. Her home-town club annually challenges swimmers to 100 X 100’s. This year, before she passed away, Jeanne asked to use the swim to raise funds for cancer research. Coach Danielle Brault, Victoria Masters Swim Club said yes and asked her club to jump in with her. 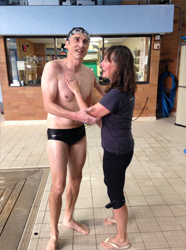 Crystal Pool (City of Victoria) generously donated the pool time to the Victoria Masters. Everyone was encouraged to challenge themselves and participate. Four long course lanes with set pace times (1:45, 2:00, 2:15, 2:30) where set up with swimmers leaving 5 seconds between one another.

A white board was set up on deck with the names of the participants. Each swimmer was asked to track 10 x 100 and then report to Katie Mcevoy who had volunteered to mark each set of 10 on the board. Each swimmer had a specific goal in mind as to how far they would swim. Over 20 participants reported 10 sets of 10 reaching the 100 x 100 goal and over $10,000 dollars was raised.

“The positive energy and focus in the pool was amazing: Jeanne’s spirit was definitely with us all day” said coach Danielle Brault.

I first met Jeanne as an age group swimmer when I was 14. She was 16 and had moved out from Ontario to swim with our team. It was the era of mega-mileage training and the “go long”, “go hard” approached seemed to stick with Jeanne more than with me. 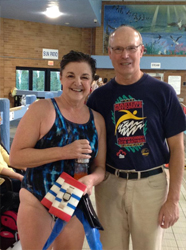 It was also the mid-1970’s in Vancouver and our team had a well deserved reputation for playing as hard as we trained. That also stuck with Jeanne although as we approached 50 and beyond, play time seems to end earlier and on a more sober note.

We both swam at SFU for a few years and were roommates for a semester in a lovely basement suite just down the road from the local Hell’s Angels’ clubhouse.

After SFU we lost touch with each other for many years, Jeanne remaining much more involved in the swimming world than me. When I got into Masters swimming in my 40’s it was a real delight to reconnect with Jeanne and to meet Glenn, her partner in everything. Jeanne was the same bright, determined, energetic person I knew as a kid, but an even better grown up – kind, wise and full of laughter – Except if you were behind the starting blocks – then she was all grit and steel.

There is a special bond with the people we meet in our formative years that time, distance and circumstances can’t break. It is like that for me with Jeanne and I will miss her very much. Her spirit however will live on and be there at a pool near you.