Notice of AGM and Request for Award Submissions

MSABC members are invited to participate in the Annual General Meeting (AGM) which will be held during our Provincials weekend on Saturday April 28th 2018 at Watermania 30 minutes after the last event is competed. There will be elections for Board positions and annual reports on all topics related to the running of Masters Swimming Association of BC will be on the agenda.
During the Provincials Championship weekend, the Ted Simpson Achievement Award and Stan Powell Memorial Service Award will be presented. Year after year, it is very difficult to get submissions for theses two awards from our membership. Every club in BC has deserving members and all it takes is a few minutes to jot down a few notes and submit an award nomination. PLEASE submit a nomination from your club before the end of March. Details can be found here

Kelowna’s grand dame of swimming, Conny Stamhuis, returned from the FINA World Masters Championships in Budapest with two gold and two silver medals in the age group 85-89. Stamhuis of Okanagan Masters Swim Club (OMSC) touched the wall 23 seconds ahead of the field in the 100 metre backstroke to win the event.  She also took gold in the 50 metre backstroke and silver in the 50 metre breaststroke and 50 metre freestyle. Commenting on her performance, Stamhuis said, “I was hoping to win at least one event so returning with two golds is a bonus!”

Not to be outdone, OMSC’s Betty Brussel continued her inspirational career performance in the age group 90-94 with silver medals in the 400 metre freestyle, 100 and 200 metre breaststroke, and bronze in the 200 metre backstroke.

Okanagan Falls resident and KISU Masters’ Glenn Carlsen took silver in the 400 metre men’s freestyle age group 60-64, while Vernon Masters’ Michael Stamhuis placed sixth. With an outstanding performance, Carlsen broke his own Canadian National and BC record by almost seven seconds. Carlsen also won silver in the 800 metre freestyle and placed 4th in the 400 metre individual medley, 5th in the 200 metre freestyle and 8th in the 200 metre breaststroke.

OMSC spokesperson Jeanette Hoft added, “Placing amongst the first ten swimmers in an international event of this caliber represents world-class achievements. Masters swimmers from the Okanagan have shown exceptionally impressive performances against top class competitors from around the world.”

The purpose of Masters Swimming is to promote fun, fitness, health, fellowship and participation among adult swimmers above 18 years of age.

Kelowna, BC, – Thirty five clubs representing 190 swimmers from across British Columbia, Canada and the USA participated in a successful BC Masters Swimming Provincial Championships this weekend at Kelowna’s H2O Adventure and Fitness Centre.

The Okanagan was well represented, with KISU’s Okanagan Falls resident Glenn Carlsen AG 60-64 securing two Canadian records in the 800 and 1500 meter freestyle and a BC record in the 400 meter freestyle. Carlsen said, “It’s always fun to race in Kelowna, because the people are always so friendly and welcoming. Masters swimming is like getting together with family who all love to race.”

Edmonton’s Barry Lewis  AG 55 – 59 secured the seventh individual Canadian record at the meet, for the 100 meter freestyle.    Lewis was also part of the Edmonton Masters Swim Club relay team that set a new Canadian record for the combined age group 200-239 in the 200 meter medley relay, together with Barry Saretsky, Gail McGinnis and Deborah Younger.

But masters swimming is about much more than setting records. It provides fun, friendship and fitness and allows individuals to challenge themselves in a safe environment. Many swimmers participated in their first competitive meet, and several seasoned swimmers also achieved personal best times over the weekend.

The volunteer committee chaired by OMSC’s Norma Lachance put in several hundred hours to make the 2017 Provincials an enjoyable and memorable experience for swimmers, guests and officials.

For more information on Masters Swimming visit the OMSC website at http://okmasters.com/openwater/ or the MSABC website at  http://www.msabc.ca/index.html 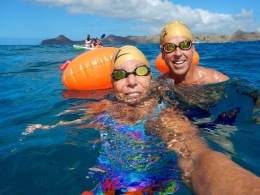 The beautiful Okanagan, together with one of the most advanced aquatic facilities in Canada, provides an unmatched opportunity to attract swimmers from around the province and beyond.  Multiple world record holder Karlyn Pipes, a Hawaiian based masters swimmer who broke six new FINA Masters world and five USMS records for the 55-59 age group this January, has confirmed her participation. Having just moved into a new age group and with H2O’s reputation as a ‘fast pool’ Pipes is focused on breaking a few more world records at the meet. She recently tied the knot with Kelowna resident Christopher Hromek.

Brenda Balderson, Treasurer of OMSC, at the 2016 MSABC Provincial Championships in Vancouver

OMSC president Sharon  Spring says,” Masters swimming is however for swimmers of all abilities and this is reflected in our participants. There is always strong competition for the MSABC Champions Trophy, presented to the team that scores the most points.  OMSC hopes that the placement of a ‘lucky Ogopogo’  in similar fashion to the ‘lucky loonie’ in major international hockey competitions, will provide a home-base advantage.”

Spring adds, “We have an enthusiastic working team of experienced volunteers under guidance of meet manager Norma Lachance, contributing hundreds of hours to make the 2017 Provincials an enjoyable and memorable experience for everyone.  We encourage masters swimmers to enter online well ahead of the April 16 deadline.”  Volunteers are still needed for time-keeping and other tasks so please sign up here. No experience is required. Long-time volunteer Sam Hoover, both encourages and draws inspiration from competitors aged 18 to 90 and above, and has supported local masters competitions for several years.

MSABC recognizes outstanding achievements and contributions to the improvement of Masters swimming in British Columbia and will announce this year’s winners at an awards ceremony on April 22. Nominations can still be made on the MSABC website.   Information on participating and volunteering  at the 2017 MSABC Provincial Swimming Championships is available here: http://okmasters.com/2017-provincials/

MSABC has approximately 1700 registered members including some at age 90 and over. Masters swimming provides excellent opportunities for improved health and quality of life through regular low-impact exercise, improved cardio-vascular function and the general well-being that comes from exercise, heaps of camaraderie and even a little competition.  If you’re over the age of 18, you’re old enough to join.

Other major swimming attractions in the Okanagan include the Interior Savings Across the Lake Swim on July 15 and the Rattlesnake Island Swim on August 5 . President of ATLS and member of OMSC, Phred Martin encourages those interested to enter early as they normally sell out.

Important Information from your MSABC Board of Directors

Your MSABC Board of Directors met recently, and would like to pass on some important information to the membership:

The idea behind the Adult Lifesaving Program was to give adults the opportunity to take the Bronze program courses (Bronze Medallion and Bronze Cross) with participants that are similar in age. Previous feedback that was given was it was a challenge to do the course with kids/youth. It could be for those who are recently retired and are looking for a job with flexible hours and want to try aquatics, if they work around the water or go to lakes, oceans or other bodies of water and want to feel safer around the water (this could include camp leaders, daycare operators etc). It is can be a resume booster for those looking to get into firefighting as some municipalities requires Bronze Cross.
We have included Bronze Medallion, Bronze Cross, Standard First Aid and CPR-C so it is a one stop shop and they will be a certified lifesaver and also have all of the prerequisites to go into the lifeguarding programs and some coaching swimming level.
There is a fitness/physical component to the courses as there will be a distance swim, victim supports, carries and removals, treading water etc. Masters swimmers will have an advantage as they are already strong swimmers. Karen Hillmann will be the instructor and brings with her over 30 years of experience teaching all levels of first aid, lifesaving and lifeguarding courses.
The course will be running September 26th –  December 12th from 5 – 9:30pm. Registration for it will open Wednesday August 10th.
If any other questions arise they are more than welcome to email or call me about. My direct line is 604-925-7215 and email is mgoddard@westvancouver.ca 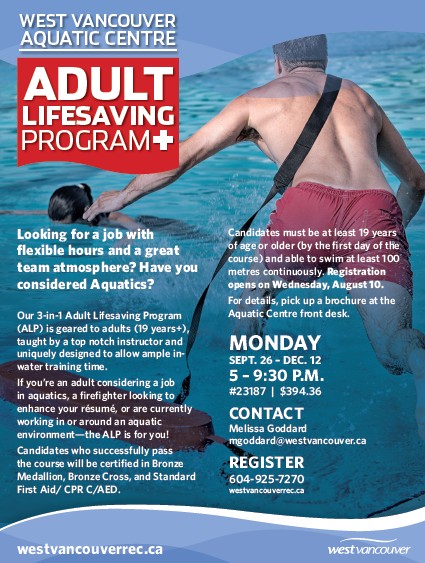